With the 43rd Academy of Country Music Awards about to hit television screens all over America, (and no ACM Party to go to tonight) – I thought it was a very good time to put a little new information on this blog. Sorry I’ve been away so long – but this is a really busy time of year for me. I’ll try to do better — honest.

First, I suppose all of you have heard that Shania Twain and her husband, Mutt Lang, have separated after 14 years of marriage. They have one six year old son, and homes in New Zealand and Switzerland. 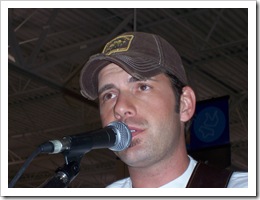 Rodney Adkins has certainly come a long way since this photo was taken at a local Wal-Mart. Rodney was on tour promoting his second CD when this was taken. And now, 4 No. 1’s later – Rodney is one of this year’s Breakthrough Artists. He’s also nominated for Top Male Vocalist and album of the year for Going Through Helll. For all of his fans in the Northeast Tennessee area, Rodney will be at Fun Fest this year. He will be on stage at 7 p.m. Thursday, July 17, at the Community Concert, presented by AGC Flatglass. Additional sponsors of the concert are 96.9 WXBQ and NewsChannel !!.

To all of you who have been enjoying the web site Buckymaina, I hate to have to tell you that the host of that site has announced that due to employment opportunities, she can no longer continue bringing us all those great photos and news about Bucky. Winnie, who I was fortunate enough to meet through this site, did say she will leave the information up as long as she is allowed. And also wanted everyone to know that you can still keep tabs on Bucky’s career by going to his site. Thanks, Winnie – for all the help and encouragement you’ve given to me with my first attempt at blogging!

Country Weekly magazine has a little piece this month about George Strait’s 1992 movie, Pure Country. Hard to believe it’s been that long! The movie is heading to Broadway – in the form of a play, of course. With songs like “Heartland” and ‘I Cross My Heart”, the original screenwriter Rex McGee, and veteran director Peter Masterson wrote the new musical’s spoken dialogue. I’ve never seen a Broadway play – maybe it’s time I think about it. George is nominated for Entertainer of the Year again tonight at the ACM awards.

I need to run and get a few things done before the awards show starts – grab your popcorn and your soft drink, and get ready! And when it’s over … you know what to do! Post a comment, or drop me a line, and let me know what you think. I just love hearing what you guys have to say about all of this!

https://www.countryschatter.com/2008/05/an-assortment-of-stuff/2008-05-18T18:30:13-04:00countryAwardsMiscellaneousNews43rd academy of country music awards,academy of country music awards,ACM,America,breakthrough artists,Bucky,country,country music awards,George,George Strait,Male,New Zealand,Northeast Tennessee,northeast tennessee area,Peter Masterson,Rex McGee,Rodney,Rodney Adkins,site,Switzerland,time,Winnie,year
With the 43rd Academy of Country Music Awards about to hit television screens all over America, (and no ACM Party to go to tonight) - I thought it was a very good time to put a little new information on this blog. Sorry I've been away so long -...
countryDonna Reacountry@countryschatter.comAdministratorCountry's Chatter

0 thoughts on “An Assortment of Stuff…”