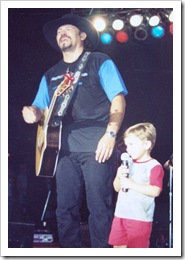 An article in the most recent issue of Country Weekly magazine is titled “Buddy’s Back.” I, for one, really hope so. I’ve missed Buddy Jewell the past few years. This picture of Buddy and his son, Joshua (who was probably 3 or 4 when this picture was taken) is now 7 years old. This photo is from an Appalachian Fair appearance a few years back.

In the article, Buddy talks about having used the last few years to spend time with his family – wife of nearly 20 years, Tene’, daughter Lacy, now 14, and son Buddy III, who is 18. You might remember that it was a comment his daughter made that inspired him to write his first hit single, “Help Pour Out the Rain,” subtitled “Lacy’s Song”. 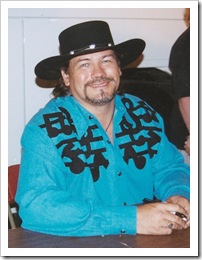 The article says Buddy will begin touring again this summer, and will be going out with Mark Wills, Trent Willimon and Ray Scott as part of the Honky Tonk Tailgate Party ’08 Tour. I don’t see anything close to here on his tour schedule – but I’ll certainly keep looking.  (Photo at the right was taken at the Washington County Fair in Abingdon, Va.)

He describes his current single, “This Ain’t Mexico,” as a controversial song about his views on illegal immigration. I just went and listened to it on his web site, I like it. And Buddy can definitely still sing!

Country Weekly quotes Buddy as saying, “I hope a lot of folks agree with me, but I know there are some folks who aren’t going to. But hey, that’s what makes it America.” And isn’t it great, Buddy, that we are all free to think the way we want, and express our opinions in whatever form we know best.

Buddy’s CD, “Country Enough,” which includes “This Ain’t Mexico” is scheduled for release on July 1. You can pre-order it at Buddy’s web site (buddyjewell.com). buddy is now recording on his newly formed record label, Diamond Dust Records. Buddy, welcome back! I hope you’ll get back to our area in concert soon.

That’s it for now. I’ll get more up for you guys soon. Remember to let me know if you hear about anything you’d like to share with my readers.

https://www.countryschatter.com/2008/06/buddy-jewell-is-back/2008-06-20T19:21:48-04:00countryNew ReleasesToursarticle,Buddy,country,help pour out the rain,honky tonk tailgate,honky tonk tailgate party,Joshua,Lacy,Mark Wills,picture,Rain,Ray Scott,Trent Willimon,Va.,Washington County,washington county fair,washington county fair in abingdon va,Weekly
An article in the most recent issue of Country Weekly magazine is titled 'Buddy's Back.' I, for one, really hope so. I've missed Buddy Jewell the past few years. This picture of Buddy and his son, Joshua (who was probably 3 or 4 when this picture was taken)...
countryDonna Reacountry@countryschatter.comAdministratorCountry's Chatter