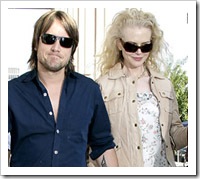 Keith Urban and Nicole Kidman on the birth of their first child, a girl! Sunday Rose Kidman Urban was born on Monday morning, in Nashville, and weighs slightly over 6 pounds.

In a posting on his website earlier today, Urban said, “Earlier this morning, Nic gave birth to our beautiful baby girl, Sunday Rose Kidman Urban.  We want to thank everybody that has kept us in their thoughts and prayers. We feel very blessed and grateful that we can share this joy with all of you today.”

The Associated Press reports, a spokesman for Urban said mother and baby are well, and Urban is happily at their side. Stay tuned to countryhound.com for more updates.

And, to Kenny Chesney, who will soon have his own XM radio station. It was recently announced that the three-time and reigning Country Music Association Entertainer of the Year will have his own XM Radio station entitled “No Shoes Radio,” which will feature all of his hits, never-before-heard studio cuts and other songs that portray the carefree lifestyle that have made his career so successful.

“There’s a lot of hits, but there are also a lot of album tracks, songs from the early part of my career, stuff from our Keg in the Closet shows and obscurities that you had to be there to hear,” says Chesney with a laugh. “Anyone who knows anything about me knows how passionate I am about music, and this is a way to bring people into everything I love about songs and playing music.”

“No Shoes Radio” will be available July 26th through October 25th on XM channel 18.

Congrats, Sara Evans, on your recent television exposure. Sara will make a celebrity appearance on the HGTV show Design Sar this Sunday night. The six finalists will be involved in a challenge, which featres Sarah as the celebrity client. The show is hosted by Clive Pearson.

She appeared on the CBS show Million Dollar Password on June 29 and married former University of Alabama quarterback Jay Barker earlier in June.

Evans co-wrote “Love You With All My Heart,” which is her follow-up single to “As If,” which she also co-wrote.

I’ll talk to you all tomorrow night. Keep reading — and keep in touch!
Country
country5@hotmail.com

Tonight: Billy Ray Cyrus to perform on CMT’s ‘A Tennessee Kind Of Christmas’

Lee Brice’s “One Of Them Girls” Certified RIAA Platinum