I told you Saturday night, that

I was in Nashville for a few days, and that was the reason I didn’t get to Fun Fest in Kingsport. And I also said I would tell you why I didn’t get to the concert – and here is the reason. I went to the annual Tennessee Press Association awards luncheon, with our publisher and several co-workers.  The event was held this year at the Millennium Maxwell House Hotel.

The Erwin Record won 17 awards that day, quite an accomplishment. Among the awards was being named the best weekly newspaper in the state for the sixth consecutive year!

Just had to share that with all of you – now, let me tell you about Lea Marie. She was in the lobby of the hotel playing piano, and singing. I talked briefly with her, and the people she was with, and learned quite a bit about this very talented young lady. 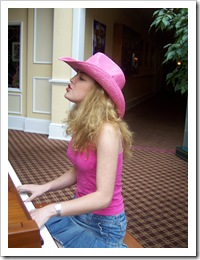 Lea Marie is 16 years old, and lives in Los Angeles. She is originally form Manhattan, NY, and spent her teen years in Connecticut. She has written more than 100 songs on piano and guitar, and her first single is currently at the No. 83 spot on the top 100 in Europe.

She writes and sings pop, country, R&B and Broadway, and loves all music. Her self-titled debut album is scheduled for release on Sept. 16. Lea Marie wrote all of the song on the CD. In addition to the 11 songs, there is a DVD with six of her music videos, and a 12 page booklet of lyrics and photos. 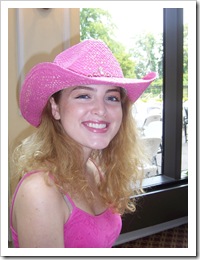 You can hear some of her music at her home page, as well as on YouTube.

She’s young, talented, and has some big plans for her future.  It will be interesting to see where she’s headed. Go listen to her music, and let me know what you guys think of Lea Marie.

That’s all for now – I have a few errands to run, and it’s already getting late. And, to those of you who are waiting for an e-mail reply from me … just give me another day or two, and I’ll get you answered then. When you go out of town for a couple of days, everything seems to get behind.

https://www.countryschatter.com/2008/07/meet-lea-marie-musician-songwriter-singer/2008-07-22T07:02:12-04:00countryNew ArtistsNew ReleasesConnecticut,Erwin Record,Europe,Hotel,Lea Marie,Los Angeles,mail reply,Manhattan,maxwell house hotel,millennium maxwell house,music,Nashville,nbsp,NY,reason,tennessee press association,titled debut album,year
I told you Saturday night, that I was in Nashville for a few days, and that was the reason I didn't get to Fun Fest in Kingsport. And I also said I would tell you why I didn't get to the concert - and here is the reason. I...
countryDonna Reacountry@countryschatter.comAdministratorCountry's Chatter

Country’s Chatter is heading to Nashville